A glowing night scene with businessmen arriving after a long day's work and shoppers returning from Boston. All are greeted to fresh falling snow at Portland's Union Station. Portlanders still fondly remember this landmark which was dismantled in 1963. Some research went into this scene. I used a 1920's Reo for the bus, an early 1930's Ford for the smaller taxi and I turned my Grandmother's 1936 Pontiac into the far left taxi. First in the Portland Series.
Signed, numbered, limited edition print of 500. Image size: 16 3/4" x 24 5/8"
Posted by John Holub at 7:19 PM No comments: 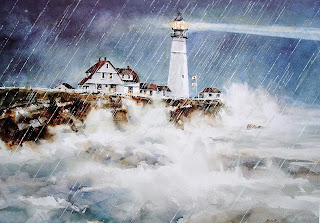 This scene captures a heavy surf crashing against tidal rocks as the oldest and most famous lighthouse in the country shines it's warning light into the Atlantic. I made the sketches and took photographs one October afternoon between rain squalls. Second in the Portland Series. Signed, numbered, limited edition print of 500. Image size: 17 1/4" x 24 3/4"
Posted by John Holub at 12:15 PM No comments:

John Holub
For those of you who enjoy the tradition of open-air impressionist paintings, my work holds great appeal. These paintings are distinguished by the varried brush strokes and rich color. For me, the essence of the painting begins on the scene. I will use either oil, watercolor, gouache, or pencil, as long as I record what excited me about the scene. I like to focus on surprises, the unexpected, an object of beauty that has been overlooked. For me it's always refreshing to get a different perspective about painting. As a result, I enjoy seeing the work of other artists, Over the years, I have studied with a few of the best: Tom Lynch, watercolor Nite Engle, watercolor Scott Christensen, oil, landscape Jim Wilcox, oil, landscape Daniel Gerhartz, oil, figure and portrait Matt Smith, oil, landscape. Each of these artists have given freely of their knowledge. Each have helped me grow as an artist and their outlook on life and living in a creative world has contributed to my growth personally. I continue to refer their ideas and the many notes I've taken.